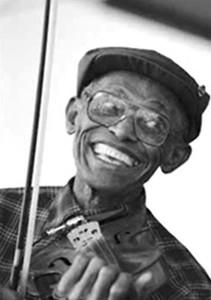 Born (1922) and raised in rural Evangeline Parish in Southwestern Louisiana, in a community known as L'Anse Aux Vaches (“Cow Cove”), Canray Fontenot’s parents were both accordion players. His mother never performed publicly but, as Canray told Anne Savoy, “my daddy [Adam Fontenot, or Nonc Adam] played everywhere. Any person over sixty years old in the black race or the white race, they heard about him. He was a great man on the accordion.”Austin Ardoin, the brother of the great Creole accordionist Amédée, lived nearby, and Canray’s father played with him on occasion. (Lomax, in Cajun Country, says that Nonc Adam taught him to play, but this seems to be speculation.) Fiddles were rarer among African-American musicians at the time, however, and Canray’s interest was piqued by his fiddling uncle Joel Victorien; he soon was scratching tunes out on a cigar-box model he built with his friend Joe Bellard: “We got the strings off his mama’s brand new screen door. We made our bows from branches off the peach trees and sewing thread. And for the rosin we got that off the pine trees, pine sap.” (Joe was the brother of the fiddler Douglas Bellard, the first Black Creole to make a record.)

From 1948 Canray played dances, Black and white, with the accordionist Alphonse “Bois Sec” Ardoin—who had learned from his uncle Amédée and from Nonc Adam Fontenot—in a group they called the Duralde Ramblers, but it was at the 1966 Newport Folk Festival where their Black Creole music was brought to wider attention and popularity. (In this they did just as the Balfa Brothers’ band had done at Newport two years earlier for white Cajun music—which, of course, was hardly strictly “white” in its DNA. Strangely, the Ramblers were identified only in Festival materials as “Creole band,” just the Balfas were listed only as “Cajun band.”) Fontenot became known as the primary practitioner of the Black Creole fiddle tradition, synthesizing elements of society set-dances with the fais-do-do or “pic-nic,” and “old-style” with “updated” tastes, from juré to la-la to zydeco.