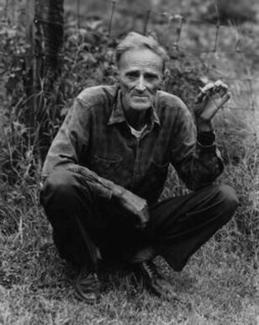 Nimrod Workman was born in Inez, Martin County, Kentucky and was named after his grandfather, "a full-blooded Cherokee Indian who fought in the Civil War and who taught his namesake the old ballads from Britain about lords and ladies and the ancient Scottish wars".[1] At the age of 14, he went to work in the Howard Collieries coal mines in Mingo County, West Virginia, and he continued working as a coal miner for forty-two years until he was forced to retire due to black lung and a slipped disc. His wife, Mollie Bowens, was of Italian descent on her mother's side. The couple had thirteen children.[1] Throughout his coal mining career, Workman was active in union politics and United Mine Workers of America organizing. In 1920–1921 he worked alongside the union activist Mary Harris "Mother" Jones in West Virginia, and participated in the Battle of Blair Mountain uprising. In later years, he advocated on behalf of black lung victims, and was able to receive union compensation for his own health problems in 1971. Following his retirement as a miner he became known as a folk singer, with frequent performances around Appalachia as well as the Smithsonian Folklife Festival and the 1982 World's Fair. He was also filmed by archivist and ethnomusicologist Alan Lomax. Workman recorded two albums, Passing Thru the Garden, with his daughter Phyllis Boyens, which was released by June Appal Recordings in 1975. In 1978, he released Mother Jones' Will on the Rounder Records label. In addition, he contributed songs to several albums of traditional and coal mining music. He was the subject of the documentary Nimrod Workman: To Fit My Own Category, produced by Appalshop Films, and appeared as himself in the documentaries Harlan County, USA, Chase the Devil: Religious Music of the Appalachians, and The Grand Generation." He is heard leading the singing of "Amazing Grace" in the funeral scene in Coal Miner's Daughter, which also featured Phyllis Boyens as Loretta Lynn's mother. Workman was a recipient of a 1986 National Heritage Fellowship awarded by the National Endowment for the Arts, which is the United States government's highest honor in the folk and traditional arts.[2] He spent most of his life in Chattaroy, West Virginia, though in later years he lived in Mascot, Tennessee. He died in Knoxville, Tennessee at the age of 99. (Source: Wikipedia)